A haven of greenery

Closed-in by walls to the east and west, the Castle Park extends over 15 hectares, between the Aygalade river to the south and the former serpentine, supplying water to the windmill, to the north.

The park of the Château de Pondres belongs to a distinctive ecosystem. From the Mediterranean vegetation in its southwestern corner – cypresses of Provence, Aleppo pine, hackberry, holm oaks, laurestine, coronilla … – there are alluvial plains of hardwood forests, fresh from the Aygalade river, formerly much larger. These classified woods contain exceptional fauna and flora. Around the great white oaks, that can date back more than two centuries, ash, maple, linden, yew and elm trees emerge from the undergrowth.

Forest paths lined with ivy, laurel, boxwood, holly or a carpet of St. John’s wort, noble alleys planted with plane trees from the 18th century in strict alignment to give the park its structure.

An Atlantic cedar, dean of the site, with a base circumference of 3.10m, is about 300 years of age.

As you approach the Monument, refined gardens and lawns have been handcrafted, the oldest lined with enormous plane trees leading out from the towers, planted in 1775. 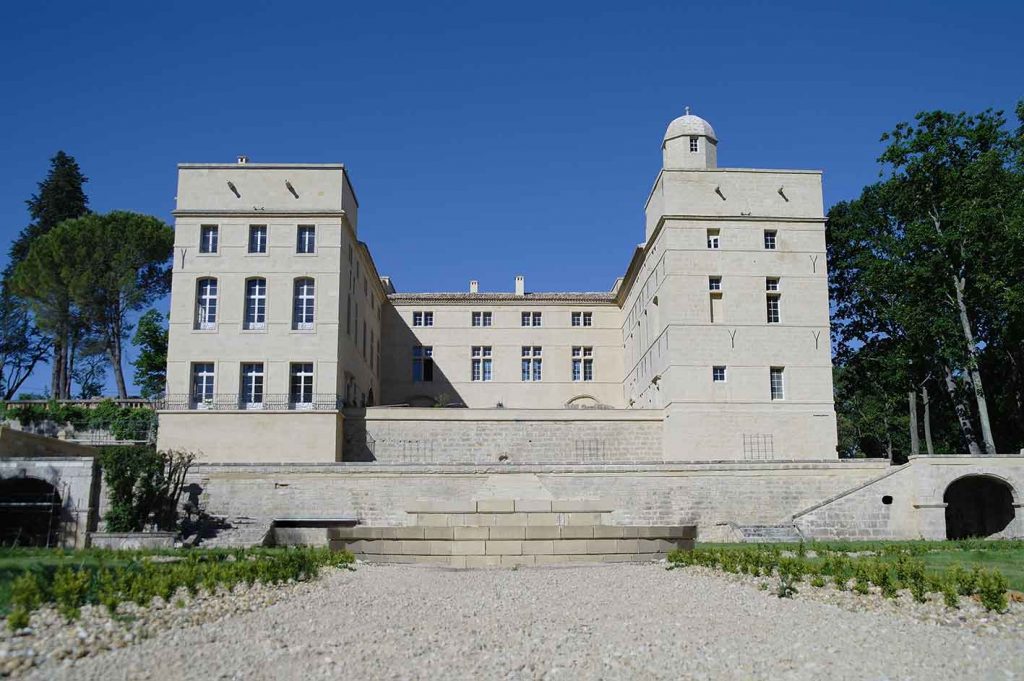 The courtyard, terraces, French gardens, buttes and rockeries have been completely restored … Surrounded by stones and the varied and warm colors of creepers, flowering shrubs,, rosebushes, nympheas and vivid climbers. 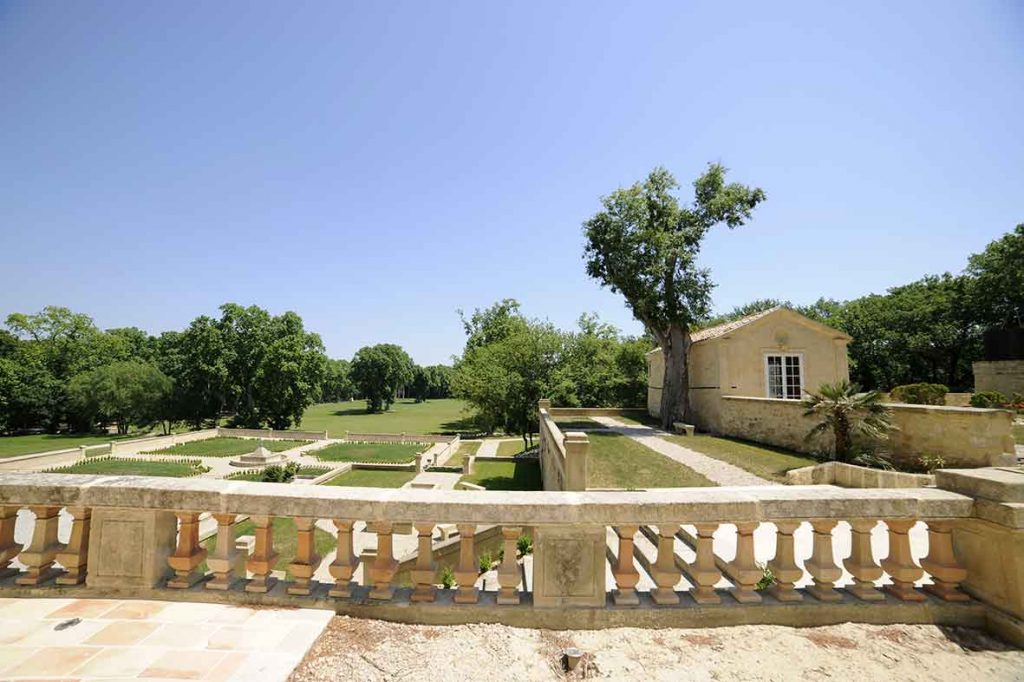 The front courtyard of the castle and terraces of orange groves. 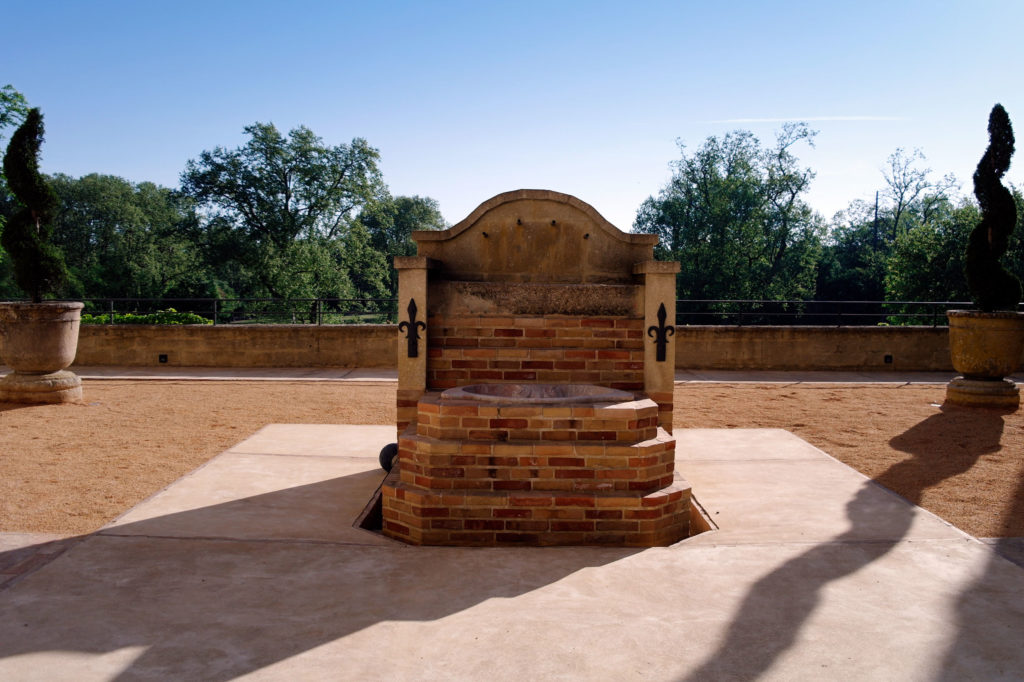 Channelled from distant lands, invaluable for man, for animals, agriculture and the mills, water has carved out the topography of the buildings and park of the Domaine de Pondres. 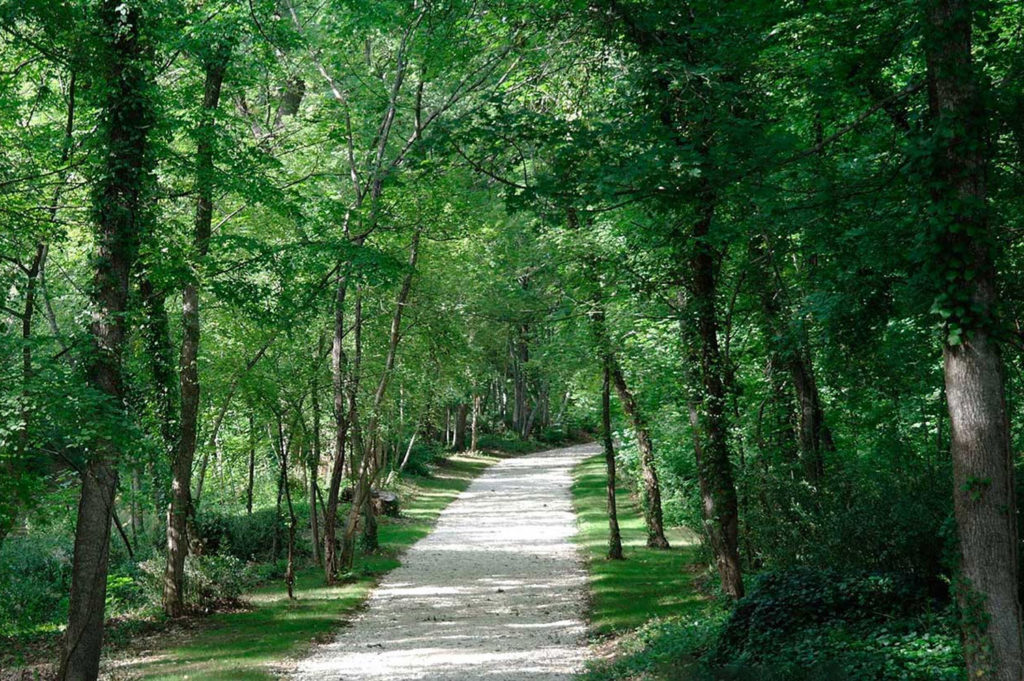 The Well of Donjon

The presence of an underground vein certainly played a part in the positioning of the Castle Donjon. In the heart of the rocky bar that separates it, is a rectangular handmade well, from where we can hear the rushing of water, 8 metres below. A vital resource in the case of a s iege.. 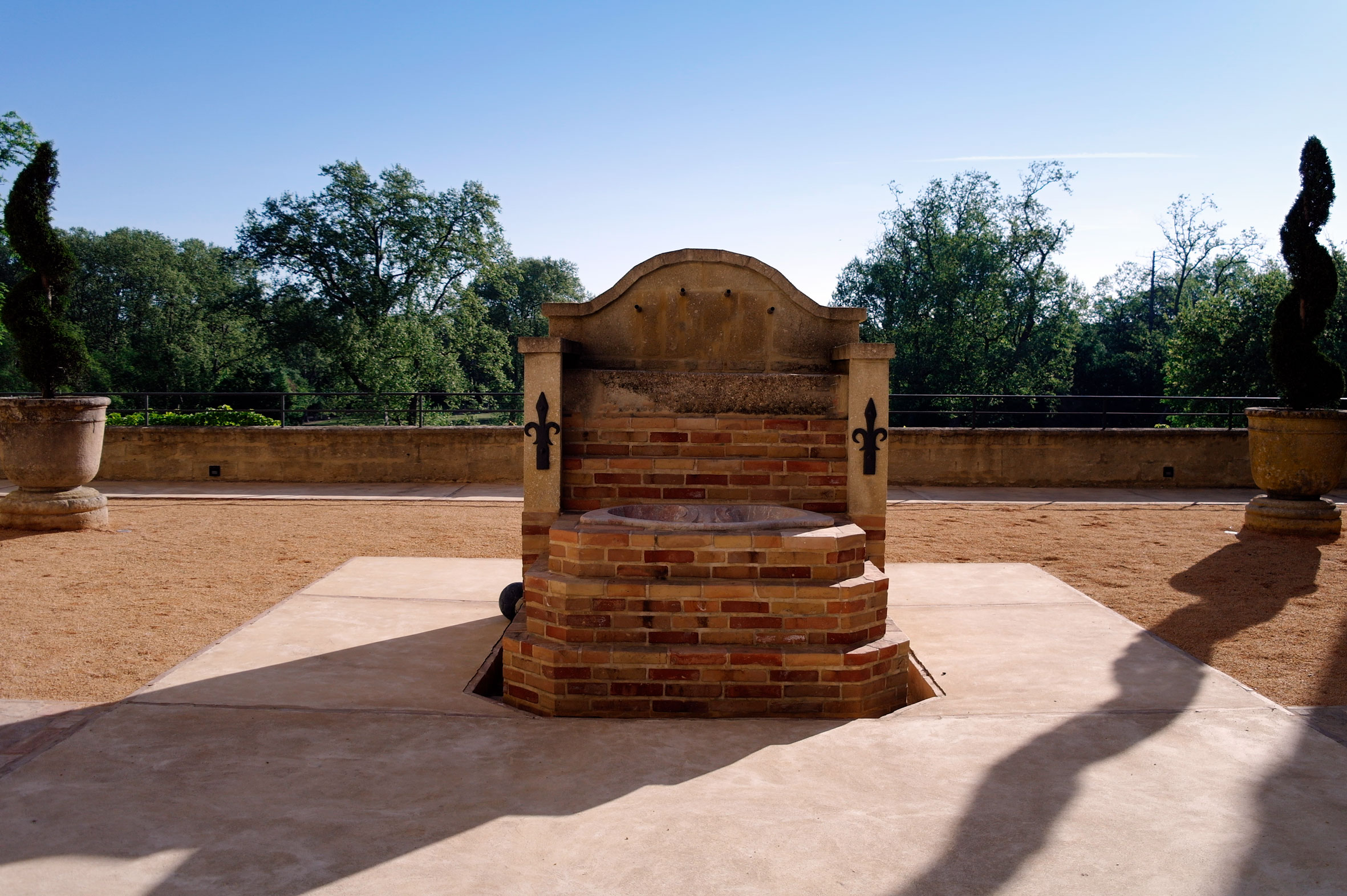 Below the terraces of the orange groves lies an immense basin buried, vaulted and built of stones, which collected the water channeled from the area around and from the grounds of Fontbuysse located several kilometers to the south east. 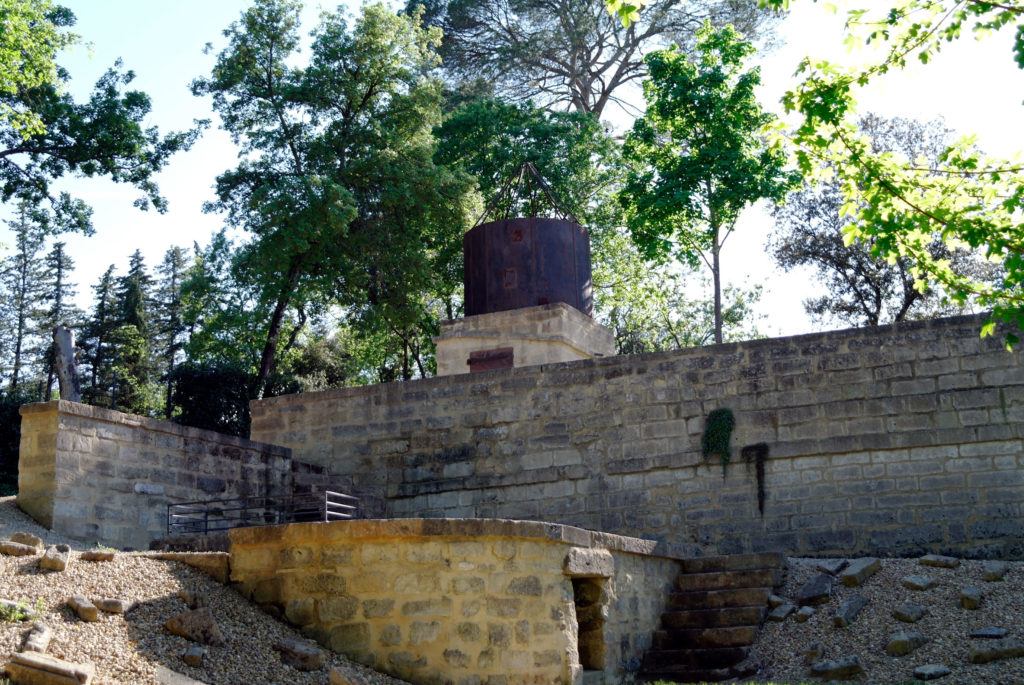 Fed by the water runoff from the western areas of the Domaine. The basin feeds: 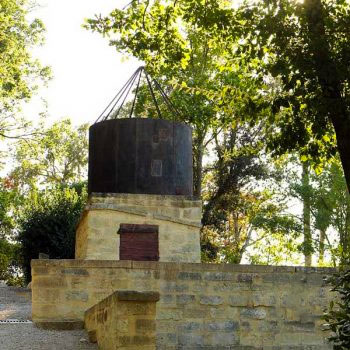 Water supply for the Mills

A complex network of canals recycled and transported the waters of the lands east of the Domaine to the mills basins.

Written text mentions the existence of a lock which deviated the river waters, of which no trace has been found. Arriving at the mills, the water flowed through two vaulted galleries, and operated the mechanisms in charge of grinding the seed and pressing the olives.

The mills were inactive during drought periods. The 20th century saw the gradual disuse of these remarkable hydrological developments as the runoff diminished due to climatic changes, and the numerous man-made, especially road, installations often broke the supply chains.

During the restoration of the park, an active recovery campaign of runoff and underground water was organized from the newly constructed south lands. The old canals and serpentine quarries, re-built with stones and waterfalls, have brought water back to the mills. Trickles of water or streams, depending on the season, winds through the Domaine below the french gardens, bringing a touch of freshness to the Park.

These canals, which are an important part of the mills, are a real work of art. Five segmented arch bridges, whose strength, dimensions and width of passage seem to indicate the importance of past activities.

The source of resurgence of subterranean veins coming from the neighboring hills, blocked in their ascent by the rock bar which traverses the Castle, the source feeds the long stone basins throughout the year. Unsure of its past use, but surely having a multiple of uses, water is invaluable for : washing, drinking troughs, ponds…

A dome of terracotta brick, once buried and covered with thick vegetation. An entrance at the foot of the building permitted the placement of ice, which was collected in winter from the edges of the river and conserved until summer periods.

A dome of terracotta brick, once buried and covered with thick vegetation. An entrance at the foot of the building permitted the placement of ice, which was collected in winter from the edges of the river and conserved until summer periods. 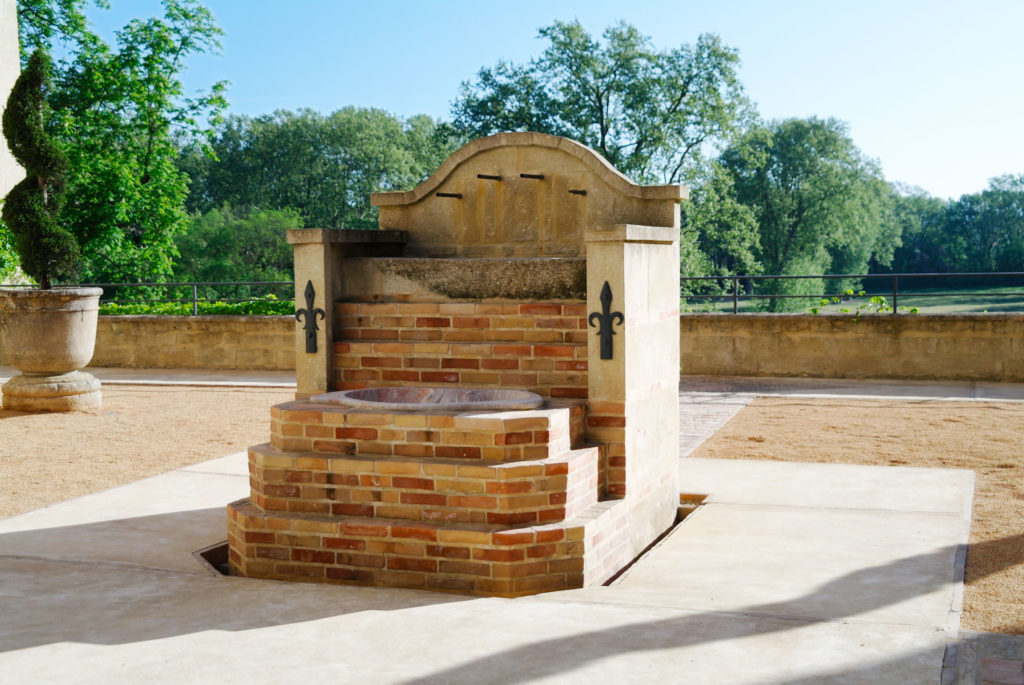 The water enters the large pool by a work of art, carved in shell, decorated with pilasters and a bow in a semi-circle, in the base of the retaining wall. The pool has a volume of 400 mᶟ and is supplied by :

When it overflows the, the pool sends waterfalls cascading down the French gardens. The central work of the “flower bed” combines circular basins, water jets and waterfalls on the pyramidal dome.

Note also, the basin in half-moon, below the collection reservoir. 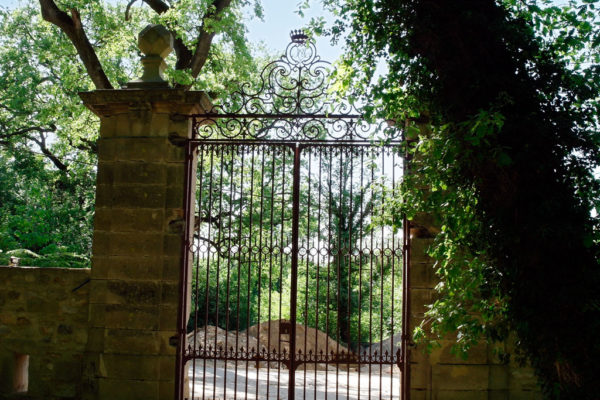